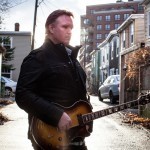 Canadian singer-songwriter-guitarist Charlie A’Court is the proverbial force to be reckoned
with. Planted at the crossroads of roots and soul, Charlie’s mighty voice, fierce guitar work and contemporary songwriting have earned him an international following and a host of awards and accolades for his five solo albums to date.

Born with the gift of voice, Charlie A’Court grew up in rural Nova Scotia, Canada, where he
spent his youth learning to play guitar while immersed in his father’s vinyl record collection –
discovering singers like Otis Redding and Sam Cooke. “I remember being so profoundly moved
and almost not old enough to know why” says A’Court. “There was something honest about the
way they sang. They would sing with such conviction that simply commanded attention.”
It wasn’t long before he discovered albums featuring blistering blues guitar.