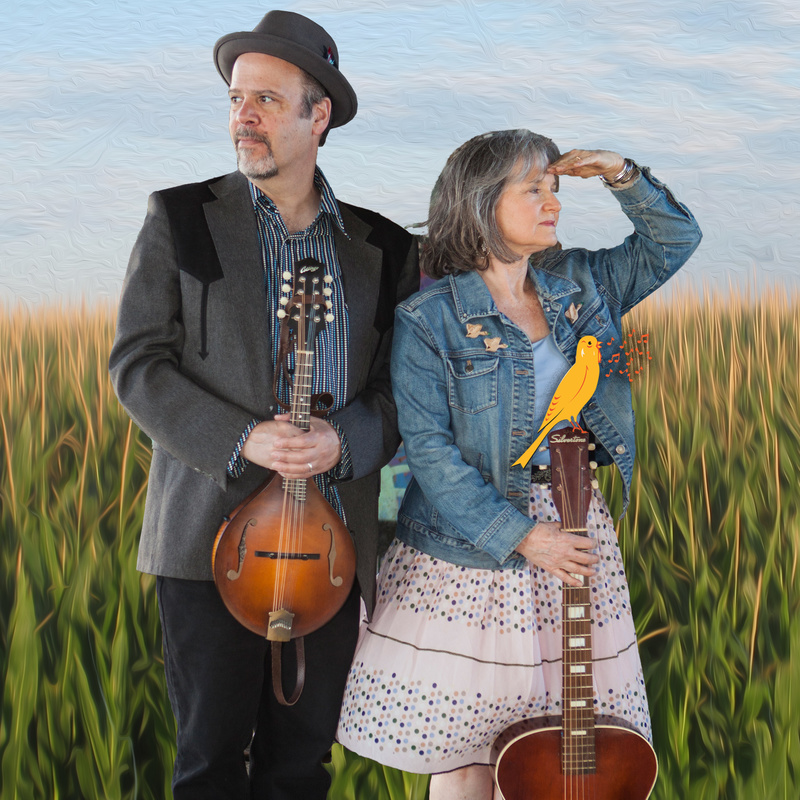 San Francisco, CA
Genre: Eclectic Folk, Americana, Blues, Bluegrass, Western Swing, Country and Pop
For San Francisco-based Claudia Russell and Bruce Kaplan, 2020 marks their 20th year playing music together. During those two decades, the duo has traversed a wide Americana landscape, stopping at wondrous musical landmarks along the way, tipping their hat to string bands, Memphis blues divas, jazz cats, Village folkies, Bakersfield cowboys and Laurel Canyon troubadours. That’s a lot of territory to cover – not just any artist can pull off such a wildly-eclectic performance. But driven by Claudia’s expressive voice and the duo’s distinctive instrumental style, it all comes together beautifully.

Whatever style she writes in, Russell has a knack for crafting tightly written songs that carry you to the sweet spots of life and the autumn colors of growing older. She possesses a remarkably versatile voice that is as at home on a whispery ballad as a full-tilt Buddy Holly-styled romp. Kaplan’s melodic accompaniment, on mandolin and electric guitar, is always spot-on. All of this is served up with a generous helping of homespun humor and shaggy dog stories, making for a heartfelt and humorous evening of deeply engaging music.

Indeed, the Milwaukee Journal-Sentinel wrote, “Russell has a voice that was born for folk music – she breaks hearts.” Russell has won numerous other accolades including Best New Artist from WUMB FM in Boston, Best Musician in the East Bay Express Reader’s Poll, 2x Kerrville New Folk Songwriting Finalist, and high praise in Sing Out, the San Francisco Chronicle, and the Boston Globe. Paul Zollo, a senior editor of American Songwriter magazine, called her latest CD, All Our Luck Is Changing, “a masterpiece.”

Russell and Kaplan have toured across the country, performing in living rooms, barns, coffeehouses and churches, as well outdoors at festivals including Kerrville Folk Festival, Boston Folk Festival, the New Bedford Folk Festival, Black Hawk Folk Festival, and concert appearances at major venues such as McCabe’s, Club Passim, The Turning Point, and more than a half-dozen appearances at Berkeley’s Freight & Salvage. They are proud to have performed along side many of the greats: John Gorka, Tish Hinojosa, Christine Lavin, Peter Rowan, Peter Mulvey, Dave Carter and Tracy Grammer and hundreds of talented, if lesser known performers.

Russell and Kaplan have released five CDs together. On their most recent, Lovers Tree, the duo shows their musical and thematic versatility with both serious ballads and playful joy rides in the mix. Classic themes of love, longing and loss feature prominently in the duskier songs, with odes to Kosher Delis, Interstate Route 5 and Johnny Cash demonstrating their playful side. Lovers Tree was produced by Grammy-winning Bluegrass legend Laurie Lewis and hit #5 on the national Folk DJ charts.

The duo’s many live on-air radio performances include West Coast Live, Roz and Howard Larman’s FolkScene, KPFA’s Dead to the World, WUMB’s Live at Noon, Folk Stage with Rich Warren, KUNI’s Live From Studio One, The Morning Show on Minnesota Public Radio as well as appearances on WORT, KCBX, KSUN and numerous other stations. Claudia and Bruce were interviewed by Robert Siegel on All Things Considered on what would have been her father’s 100th birthday. He (Val Rosing) was a British dance band singer best known as the vocalist on the original 1930s recordings of classics such as Teddy Bears Picnic and Try A Little Tenderness.

Before starting her solo career, Claudia was a member of BMG recording artists Maggie’s Farm – performing around the country, including Farm Aid where she shared the stage with Willie Nelson and Kris Kristofferson. She was also one-third of the Life Is Grand Band, an award-winning vocal trio with Jill Freeman and Laura Zambo. Their 1990 FastFolk recording has been added to the Smithsonian/Folkways collection, making Claudia a bona fide national treasure!

Russell has also been a cast member of Wisconsin’s most prolific presenter of original musical theater, Northern Sky Theater, appearing in productions Old Friends, Goodnight, Irene, Fish and Whistle and Home for the Holidays.

Kaplan has played in bands most of his life, starting in the world of New Wave music in such bands as The Toasters, The Young Adults, The Allison MacLeod Band, Annyland, and The Tearjerkers, where he met Russell backstage on a shared bill. That was 1988. Russell and Kaplan were married in 1990 and will celebrate their 30th Anniversary this year – by getting on a plane for their Canadian tour.

“Making music is our favorite thing to do, and we put a lot of love into it,” says Kaplan. “But playing in a band with one’s spouse is not without its hazards. Some couples argue about sex or money. We argue about song keys, set lists, and ‘who stole my capo?’ But all in all, we’re very lucky to have found each other.”

Visit www.claudiarussell.com to have a closer look/listen to this unique duo.

What people are saying about Claudia Russell and Bruce Kaplan

We had a wonderful, warm and funny show with Claudia Russell and Bruce Kaplan last night! Claudia writes terrific songs and sings like an angel and both she and Bruce are great musicians. Thanks to them for a great show! – Peter Cutler, Fiddler’s Crossing

“Claudia Russell is a great live performer and a vocalist in the old-fashioned sense. She can really sing. Not only does she have an impressive set of pipes, she interprets songs rather than merely convey the lyrics. She’s a superior voice in the crowded field of singer-songwriters.” – Rich Warren, Folk Stage

This was one of the best shows I have seen in a very long time. A real feel good evening! – Helene Korolenko, New Bedford Folk Festival

“Claudia Russell is a gifted songwriter with a gorgeous singing voice. Whether singing a sad song or a happy one, her voice shines through with great purity with a gentle, reedy quality. Her songs come to life with an effortless spirit of genuine soul. This is heartwarming stuff, both inspirational and comforting at a time we need inspiration and comfort more than ever.” – Paul Zollo American Songwriter

“Claudia Russell is the Judy Collins of our generation” – Christine Lavin

“Russell has a voice that is made for folk music. She breaks hearts…”
– Elaine Schmidt, Milwaukee Journal Sentinel

I took in a Claudia Russell concert this weekend, and I have to tell you that it was spectacular (as Claudia always is). If you haven’t seen Claudia and her husband Bruce Kaplan, RUN, DON’T WALK, to their next concert. You won’t be disappointed. They’re terrific! – Suzyn Mills – Acoustic Renaissance Concerts, Chicago IL

“Berkeley’s Claudia Russell is a smoky-voiced thrush able to deliver a cosmopolitan lounge blues or a bluegrass romp with equal aplomb. She also is a fine guitar picker and songwriter, with tunes that sound like ready-made Americana hits. Her impressive melding of pop, country, folk, bluegrass, swing and classical American songwriting mark Russell as an original talent with an impressively eclectic vision.
– j. poet, East Bay Express

“You might think that a singer as powerful as Russell would play The Diva on stage. But just the opposite. Instead, Russell assumes a sort of latter-day Gracie Allen character – a little dizzy – while husband Bruce Kaplan plays the George Burns role. Their banter is hilarious and they seem to take pleasure in trying to make each other laugh. So, while the two take their music seriously, they know how to have fun. This in-between comedy is a nice bonus that helps endear Russell and Kaplan to their audience.”
–Mike Rossney, Coast to Coast Arts, Sargentvile ME