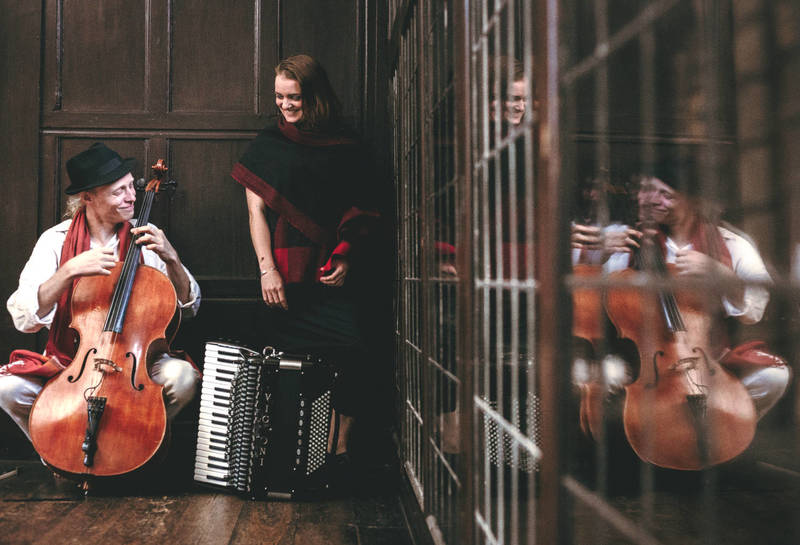 UK
Genre: Contempory/Trad/Percusive Dance
Described as “a true original” by the Guardian, spellbindingly innovative musician and dancer Hannah James has been one of the key figures in the revival of English percussive dance in recent years.

Renowned as one of the best accordionists on the British folk scene, her musicianship extends far beyond the tradition and flawlessly incorporates beautiful vocal stylings with both classic and contemporary applications of English clog dance. She amazed audiences across the UK showcasing all of these with her breathtaking one-woman show, JigDoll, when she unveiled it in 2015. Her most recent project, The JigDoll Ensemble, was critically acclaimed as “the highlight of the festival” at the Folk Expo Manchester in late 2017 when it was debuted, garnering a standing ovation from professional delegates from across the world.

A collaborative project which she featured in, Songs of Separation, won the BBC Radio 2 folk award for Best Album in 2017. Her vocal trio Lady Maisery have produced three critically acclaimed albums and have also been nominated for the Horizon award at the BBC folk awards, and her previous duo with Sam Sweeney gained a Best Duo nomination in 2013.

She also works with legendary folk Singer Maddy Prior in a trio which has just released a second album. In 2016 she was asked to dance with Seasick Steve on stage at Wembley arena to 10,000 people, and joined him again on Jools Hollands’ Hootenanny which was broadcast nationally on BBC 2.

Her music is rooted in the English Tradition but is also influenced by her travels and collaborations with many international artists and her time studying at the Sibelius Academy in Helsinki.

French cellist Toby Kuhn is a post-classical musician with a taste for improvisation and folk music of all persuasions. Always on the lookout for new ways to play his instrument, his unorthodox approach wins admiration and acclaim from a variety of music-lovers, from the concert stage to the pub, from Japan to Slovenia via Sweden and Canada, bringing the full potential of the cello with him on his journey across style and invention.

Hannah and Toby met in Summer 2018 at Floating Castle festival in Slovenia. After seeing Hannah perform one of her solo pieces Toby suggested she should keep him in mind if she ever needed a cellist. After a short jam in the Slovenian sunshine it was clear that these two musicians shared a common approach to music making and a real artistic chemistry. Toby Joined Hannah at a solo gig a few days later and a new duo was born!

Their music is soulful, original and conversational. The combination of accordion and cello allows for a huge palette of sounds and textures which lift James’s pure voice and deeply honest songwriting. In the next breath they switch to choppy rhythms and joyful interplay between cello and percussive dance. This duo deliver a diverse, playful and hugely original performance.