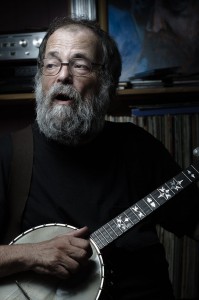 Mitch Podolak is a prominent fixture in the North America folk music world and is the creator and past founding artistic director of the Winnipeg Folk Festival, the Vancouver Folk Music Festival, Winnipeg’s West End Cultural Centre, The Winnipeg International Children’s Festival and Home Routes/Chemin Nous, North America’s only house concert network. He is also the co-creator, founding artistic director and team mentor that founded the Stan Rogers Folk Festival in Canso, Nova Scotia. Since 1974, Mitch Podolak has developed and led in the evolution of folk festival culture across Canada, and his efforts have seen hundreds of thousands of folk music fans come together in a common cultural cause. His methodological approach to structuring and motivating a volunteer corps in the art of running a festival has become the Canadian standard. His work is motivated by a love of folk music, of which his knowledge is extraordinary, and by a social view paralleling that of Pete Seeger and Woody Guthrie, are Podolak’s strongest influences. In 2014, he received the Unsung Hero Award, the peer-driven lifetime achievement award of the Canadian Folk Music Awards. Mitch Podolak has had huge influence on the provincial and national cultural funding institutions that now all support folk music. Brandon University is recognizing his work with an honorary doctorate.

“I am pleased to recognize Lisa de Wilde and Mitch Podolak for their contributions to arts and culture as well as the creative industries on the national and international stage,” said Dr. Gervan Fearon, BU President and Vice-Chancellor. “Both have used their talent, leadership, and commitment to excellence to showcase the music, films and ideas of others. They inspire us all to find opportunities to strive for excellence in our own endeavours and to find opportunities to contribute to the success of others on whichever stage we perform.”

The conferring of an honorary Doctor of Laws (honoris causa) at Brandon University bestows honour upon a deserving candidate who has made an outstanding contribution in one or more designated categories including the University, society, professional life, public service and the advancement of knowledge. Nominations are received from both the Brandon University and greater Westman communities.

Brandon University, founded in 1899, promotes excellence in teaching, research, and scholarship, and educates students so that they can make a meaningful difference as engaged citizens and leaders.

Twelve new members will be inducted into the Order of Manitoba this year, Lt.-Gov. Philip S. Lee, chancellor of the order, announced Tuesday.

The Order of Manitoba, the province’s highest honour, recognizes individuals who have demonstrated excellence and achievement in any field of endeavour, benefiting the social, cultural or economic well-being of Manitoba and its residents.

“As my term as lieutenant-governor and chancellor comes to a close, I have been honoured to oversee the induction of 63 new members to the order. When I include those selected in 2015, it brings to 75 the number of exceptional women and men recommended for investiture during my time as chancellor.

“While the individual accomplishments of the 12 women and men recommended this year for investiture are wide ranging, they share the giving spirit and commitment to community for which Manitobans are known. Whether their impact is felt at the local or international levels, they are each a credit to our province and our country.”

• Chad Allan, a rock music icon, for his contributions to the Canadian music industry including the pivotal role he played in the creation of two legendary Winnipeg rock bands, The Guess Who and Bachman-Turner Overdrive;

• Karen Beaudin, a community resource co-ordinator and proud Manitoba Métis, for increasing support, understanding and respect for Indigenous people in the workforce and her ongoing service to the community;

• Tom Cochrane, a multi Juno Award-winning musician, for his celebrated accomplishments as a member of Red Ryder and as a solo performer, and his far-reaching humanitarian efforts;

• Dian Cohen, economist, broadcaster and author, for her economic acumen, broadcast excellence and the important role she has played in shaping community strategies and government policies;

• Wilma L. Derksen, artist, author and internationally respected expert on the unique needs of victims of serious crime, for her long-standing support and advocacy following the abduction and murder of her daughter Candace in 1984;

• Sheldon Kennedy, well known for his NHL career, but better known for turning the tragedy of a history of sexual abuse into awareness, hope and help for other victims around the world;

• Mitch Podolak, founding artistic director of the Winnipeg Folk Festival, for his contributions to the folk music community, and establishing and promoting  music festivals and artistic venues in Manitoba and throughout North America;

• Khhem Kamarie (Monica) Singh, a member of the Manitoba Ethnocultural Advocacy and Advisory Council, for actively supporting recent immigrants to Manitoba, especially in areas that help to improve the quality of life of women, their families and communities; and

• Jonathan Toews, Chicago Blackhawks captain, Stanley Cup victor, and gold-medal winning Olympian, for his tremendous contributions to sport and the community while serving as an exemplary model for Canadian youth.

Recipients are selected by an independent advisory council that evaluates all nominations received and then recommends up to 12 candidates each year to the chancellor. Once inducted into the order, members may use the initials O.M. after their names for life.

This year’s investiture will take place at a ceremony to be held July 9 at the Manitoba Legislative Building.