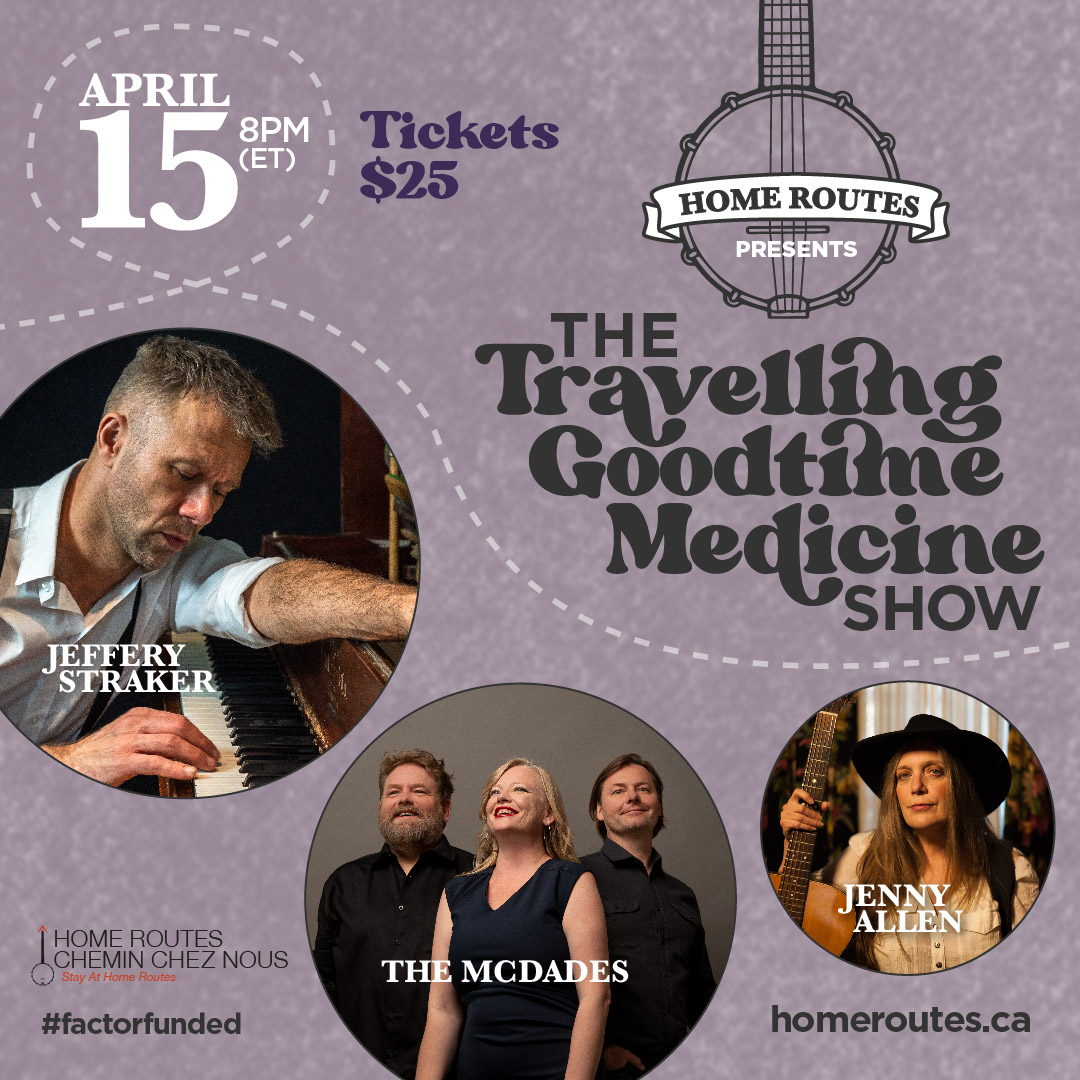 Home Routes proudly presents the third of five shows in our #factorfunded series: The Travelling Goodtime Medicine Show. The Calgary edition of this travelling online roadshow features Jeffery Straker, Jenny Allen, and The McDades coming to you from the beautiful National Music Centre.

This “In The Round” virtual concert was recorded at The National Music Centre in Calgary, AB, and will be broadcast via Side Door Access’ platform, on Friday, April 15, 2022 at 8pm ET. Ticket prices start at $20, suggested price $25. This show will be available for 48 hours for ticketholders to watch at their convenience, as many times as they want.

The rootsy storytelling of Jeffery Straker’s songs has the power to transport a listener out onto a lake in Canada’s North or to the main street of a prairie town.  A clever lyricist with an energetic piano style, his song writing has drawn critical comparisons to the likes of Harry Chapin, Kris Kristofferson & Billy Joel, while maintaining a style distinctly his own.

He’s recorded his music for CBC radio’s ‘Canada Live’, has seen his songs used in film, TV and theatrical productions and in 2020 was awarded “Roots/Folk Artist of the Year” at the Saskatchewan Music Awards.  In 2019 he received his first Western Canadian Music Award.

Jeffery Straker grew up taking piano lessons in small-town Saskatchewan and has gone on to perform over 100 shows per year across Canada, Europe and Latin America. His album “Dirt Road Confessional” debuted at #5 on the iTunes Canada singer-songwriter charts.  Listeners and critics took note.  The Chicago Free Press has written, “Rufus Wainwright, as well as k.d. lang are among the Canadians making essential and beautiful music. Add the name Jeffery Straker to that list”.

Since opening for the likes of Taj Mahal, Jennifer Warnes, and Shawn Colvin, Jenny Allen’s music has invited comparisons to Mary Chapin Carpenter and Tracy Chapman, swinging effortlessly between a rich variety of styles such as roots, blues, pop and rock.

On the heels of her acclaimed sophomore release ‘If I Fall,’ Allen joined forces with Calgary-based songwriters Lin Elder and Lori Reid. Their trio ‘The Fates’ became one of Alberta¹s most beloved concert acts, touring extensively throughout Western Canada over nine years in support of their three studio CD releases, receiving extensive airplay and charting at #2 for best album of 2008 on CKUA Radio.

Continuing to write and perform as a solo artist, Allen is set to release her first solo project in ten years. For her many fans it’s no exaggeration to say the record is highly anticipated, featuring production by BCCMA Producer of the Year John MacArthur Ellis (Ridley Bent, Leeroy Stagger) and a set list of original songs well-seasoned with experience, insight, and emotional impact. Jenny captivates audiences with her songs and stage presence, clearly demonstrating she’s a musical force to be reckoned with.

Punching through the walls of tradition, The McDades’ Celtic-rooted music fuses the spontaneity of jazz improvisation with infectious global rhythms. The JUNO Award winners’ cutting edge sound is the perfect compliment to their fiery performances.

At the heart of the group are siblings Shannon, Solon, & Jeremiah, who grew up playing folk music alongside their parents, surrounded by artists from around the world. This unique upbringing led to a love and respect for broad types of music. Their ground-breaking compositions and innovative arrangements are a testament to those formative years and a near-telepathic interaction on stage.

With vocal harmonies that can only come from a family, The McDades combine original tunes with unique interpretations of traditional songs, energetic instrumentals and vocals in both French and English. They “find their groove somewhere between a down-home kitchen party, a jazzy after hours club, and a folk festival.” (London Free Press)