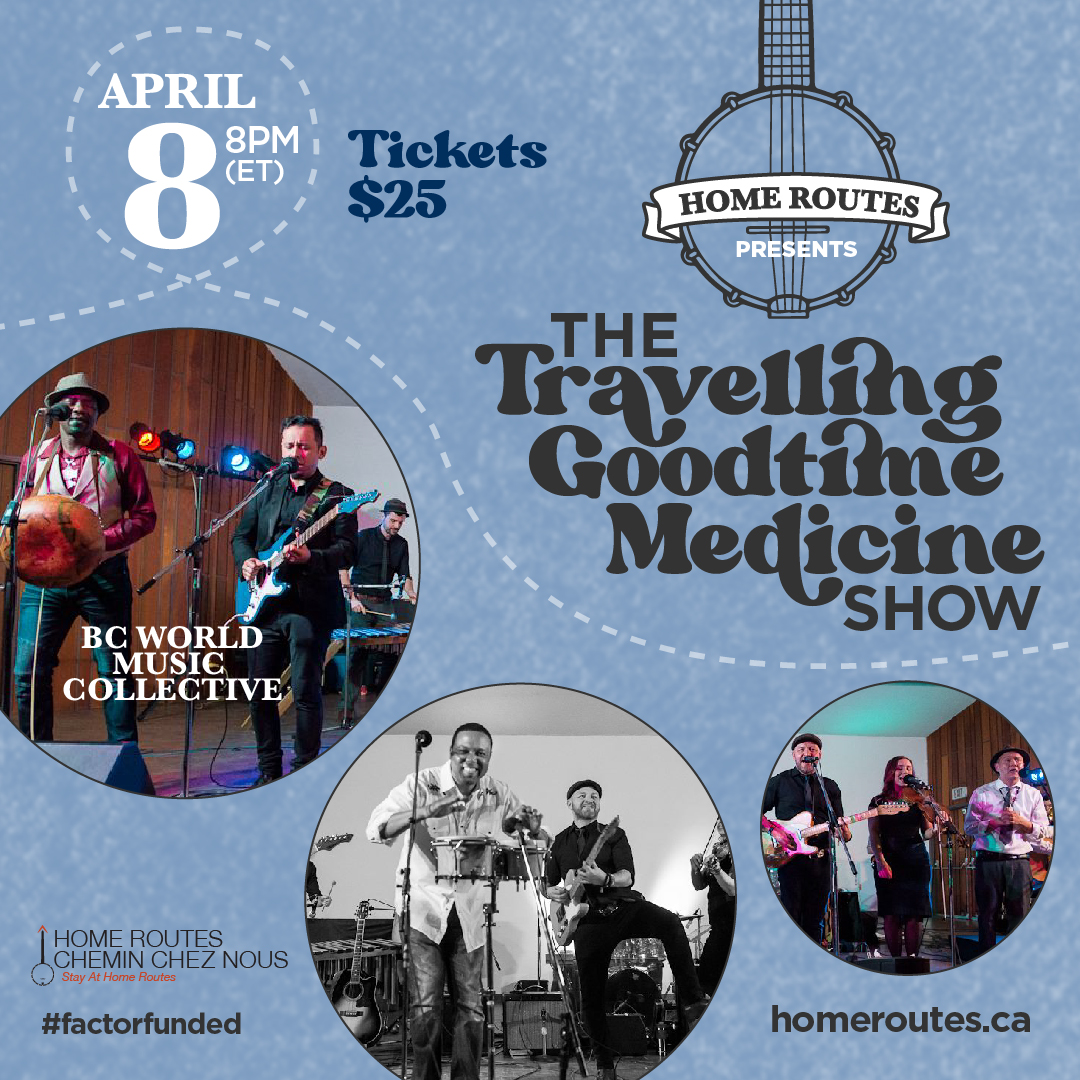 Home Routes proudly presents the second of five shows in our #factorfunded series: The Travelling Goodtime Medicine Show. The Vancouver edition of this travelling online roadshow features the BC World Music Collective, a powerhouse group of 13 musicians, each of whom is a renowned performer in their own right. This show was recorded at Blue Frog Studios, Canada’s leading live recording theatre, host to countless intimate concerts for both in-person and online audiences.

This “In The Round” virtual concert was recorded at Blue Frog Studios in Vancouver, BC, and will be broadcast via Side Door Access’ platform, on Friday, April 8, 2022 at 8pm ET. Ticket prices start at $20, suggested price $25. This show will be available for 48 hours for ticketholders to watch at their convenience, as many times as they want.

The project first began in the summer of 2015, when the artists were asked to come together to perform at the Vancouver Island MusicFest. After an intense week of rehearsals, the group made their first appearance on the mainstage of the festival. After their set, they were all elated with how it went, and decided one performance just wouldn’t be enough. A few weeks later, a plan was hatched to turn the one-off project into the province’s most exciting World Music band.

Vancouver Island MusicFest director, Doug Cox, who was instrumental in bringing the project together, has this to say about the band’s first performance.

“The BC World Music Collective was one of those special projects at our Festival that worked from the get-go. Quite a wonderful celebration of the multiculturalism that makes up our fair Province. Beyond all that, it was just good, high energy fun as well! “

The summer of 2016 saw the band take on its first mini tour, playing at The Hornby Island Music Festival, The Filberg Festival, The Harmony Arts Festival and more. Artistic Director of the Hornby Festival had this to say about the band:

“These 13 musicians, all with their own careers in world music, brought energy and new life into musical traditions from around the world. The collaboration, musicianship and enthusiasm on stage was exciting and our audience was up and dancing from the first song.” – Dierdre Atkinson (Hornby Festival)