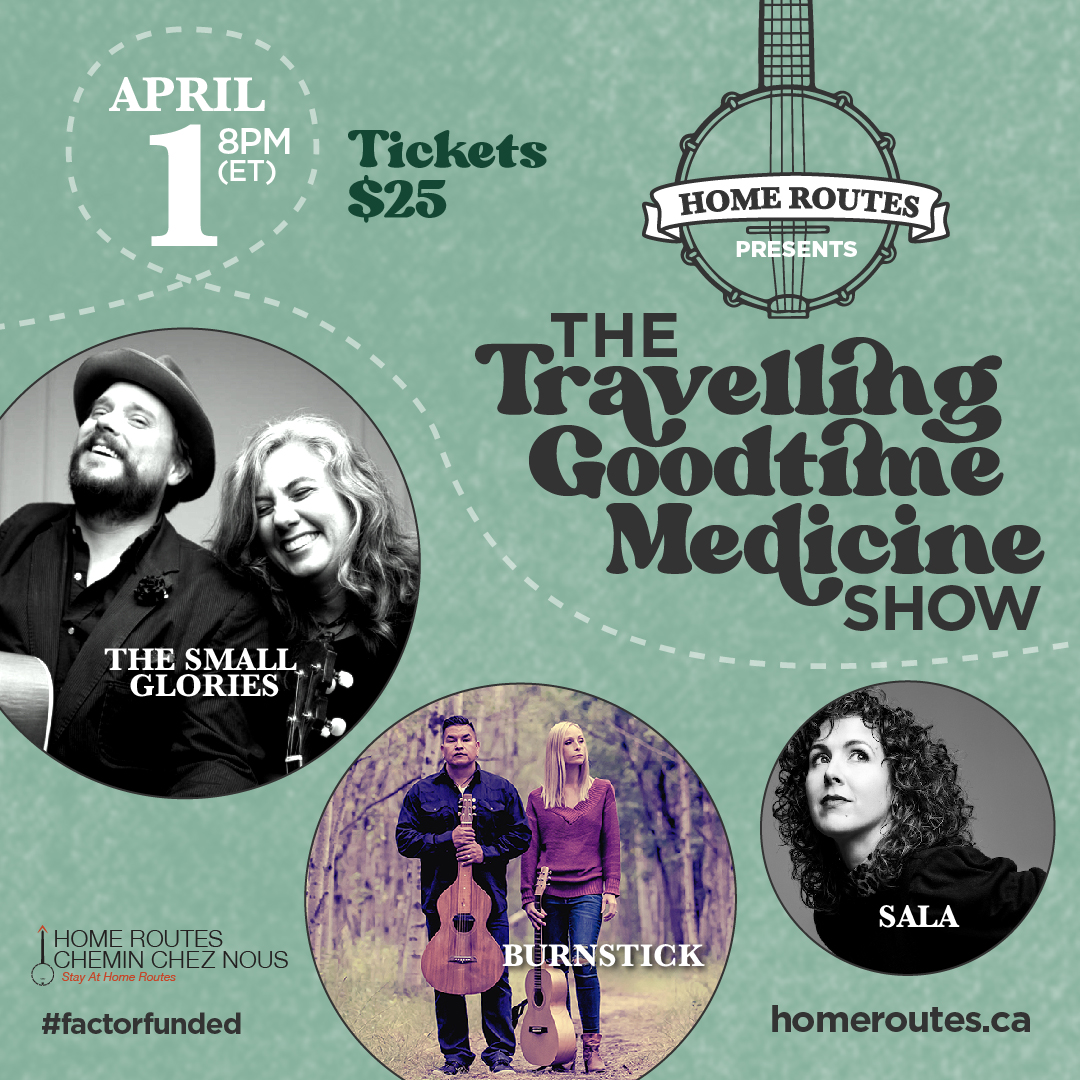 This “In The Round” virtual concert was recorded at the West End Cultural Centre in Winnipeg, Manitoba, and will be broadcast via Side Door Access’ platform, on Friday, April 1, 2022 at 8pm ET. Ticket prices start at $20, suggested price $25. This show will be available for 48 hours for ticketholders to watch at their convenience, as many times as they want.

Burnstick is folk music that’s brimming with the kind of chemistry that could only come from a husband and wife. Jason, a Plains-Cree guitarist, and Nadia, a Francophone-Métis singer-songwriter, have come together to create the award-winning duo: Burnstick.

Two performers whose voices and languages blend together with ease, Burnstick pushes the boundaries of contemporary folk music, weaving together the unique sounds of vintage Weissenborns with intriguing vocal harmonies, while allowing the beauty of simple melodies to shine through. It’s hard to deny the magic they create as they command the stage with their palpable performances.

In 2015, they created an award-winning all-original lullaby album that married languages and bridged cultures. Coming back to their folk roots, Burnstick has released its JUNO-nominated debut album, Kîyânaw, featuring thunderous singles “Pay No Mind” and CFMA Single of the Year “Some Kind of Hell”, topping the charts of NCI’s Indigenous Music Countdown in Canada.  With this album, Burnstick encourages the reclamation of each other’s respective cultures while choosing to be stronger, together.

Sala (aka Ariane Jean) is poised, gentle, a pristine surface covering the ripples of an intuitive, emotional nature. The former member of Juno Award-winning Chic Gamine returns after a 5-year hiatus to take her first steps as a solo artist.

Her intimate, sometimes melancholy jazz, ambient and pop-infused songs tell of anger and forgetting, of shedding skin and escaping the everyday to find refuge in imaginary worlds. Like snapshots of specific moments in time, Sala’s lyrics lean toward the symbolic rather than the literal. She creates by taking in sensations and moods and translating them into images, layering lush vocals on which her airy soprano can soar. Her voice embodies all the agility, soul and refinement she possesses. She’s all about soft tones and subtle nuances. The result is moody, atmospheric music that evokes the introspection of foggy mornings and rainy afternoons. Sala’s first and second singles were released in spring and summer 2020 and her eponymous EP was released in October, 2020.

Roots powerhouse duo The Small Glories are Cara Luft & JD Edwards, a musical tour-de-force partnership planted on the Canadian Prairies.  Thrown together purely by accident for an anniversary show at Winnipeg’s venerable West End Cultural Centre, The Small Glories could almost make you believe in fate.

With a stage banter striking a unique balance between slapstick and sermon, these veteran singer-songwriters have a way of making time disappear, rooms shrink, and audiences feel as they are right there on the stage with the band — writing the songs, living the songs, performing the songs. “We’re folk singers, we try to write stuff that people can relate to,” says Edwards, whose looming stage presence and penetrating eyes find him the yin to Luft’s petite, snort-laughing yang. A Small Glories performance is really about what happens in-between the songs. “The feedback we get from a lot of audiences is that it’s not just about the music for them,” Luft says. “It’s the whole package.”