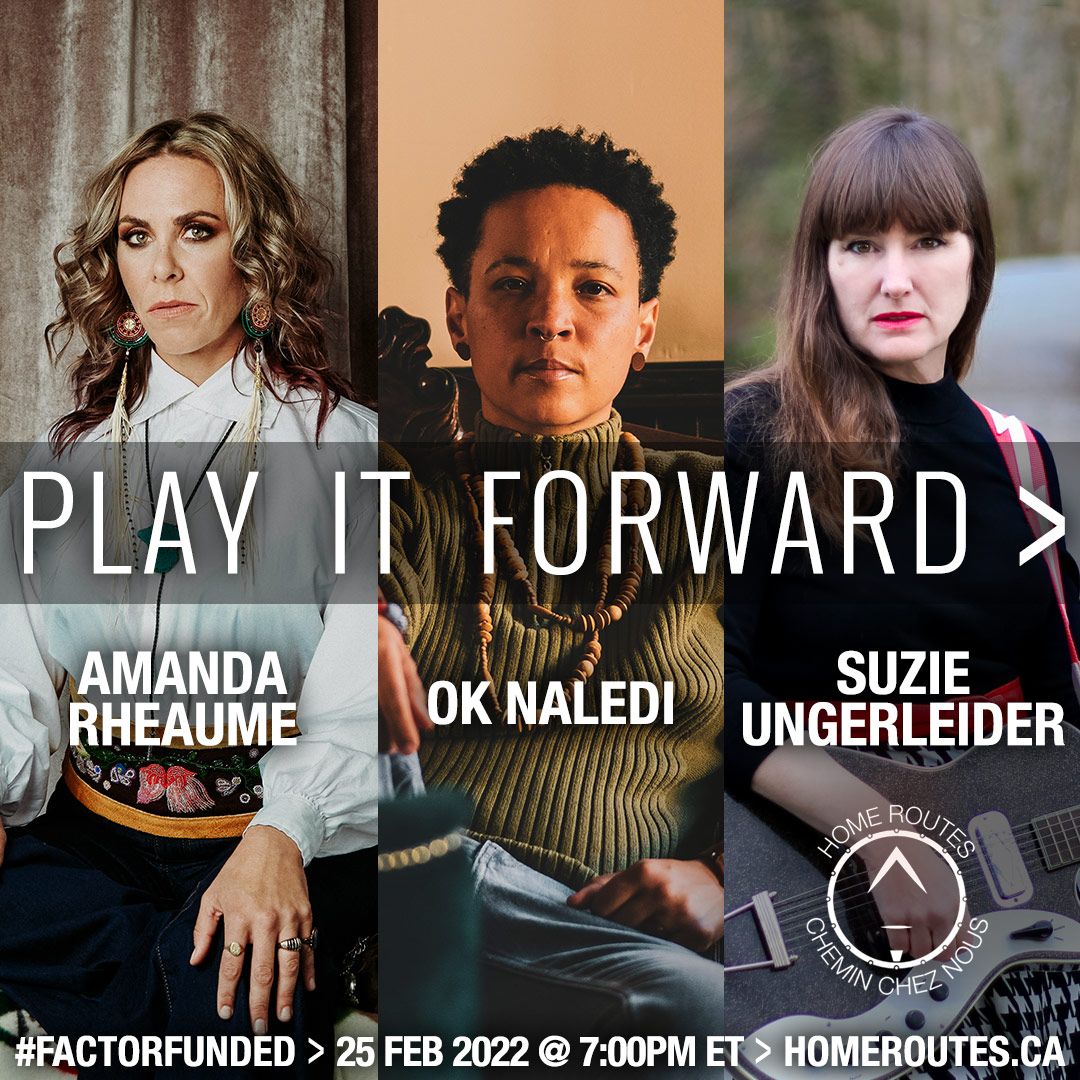 Thanks to the generous support of FACTOR, Home Routes has been able to curate this series, presenting a wide diversity of Canadian music (30 artists), in professional venues across the country, during a much needed time for live arts workers. In addition we have also been able to pay it forward to partnering non-profit organizations with a percentage of sales donations. As we approach International Women’s Day in March, 20% of revenues raised from sales of this show will go to https://canadianwomen.org/, This year’s theme is #breakthebias.

This “In The Round” virtual concert will be recorded live at Blue Frog Studio, BC & Raven Street Studio, ON, virtually connecting the artists with each other and broadcast safely and securely via Side Door Access on Friday, February 25, 2022 at 7pm ET. Ticket prices start at $20, suggested price $30, and are available for purchase now here. If patrons are not able to watch it at that time, this show will be available to watch for 48 hours at their convenience, as many times as they want.

Amanda Rheaume’s rootsy, guitar-driven ballads introduce crucial dimensions to the world of Heartland Rock. In a genre characterized by anthems of underdogs, assumptions and unfair advantages, Rheaume’s sound and story crucially and radically expand the boundaries, geographic and cultural, to make space for new perspectives on resistance and resilience. A Citizen of the Métis Nation, and an active and proud member of the 2SLGBTQ+ community, Rheaume’s music is indeed from the heart, and the land.

First a songwriter, Rheaume comes from a long line of tireless, transformational organizers and activists, and carries this lineage forward in her ever-growing role as a crucial builder of Indigenous music infrastructure and community. From the International Indigenous Music Summit, to newly-founded Ishkode Records, and the National Indigenous Music Office, the goal of raising Indigenous sovereignty in the music industry drives all of Rheaume’s work.

Rheaume (she/her) has released 5 full-length albums over a period of 15 years, a self-managed career that has traveled countless tours and milestones. 2013’s Keep a Fire was nominated for a JUNO Award and won a Canadian Folk Music Award for Indigenous Songwriter of the Year. With a new single “100 Years,” a driving, surging Copperhead Road-esque journey through a wilfully, harmfully misrepresented chapter in a violent colonial timeline, Rheaume makes a powerful statement about history and identity.

OK Naledi expresses the world as they see and experience it with an eloquent poetry and grace. Connecting with her fan base by creating content that elevates and celebrates the experiences of marginalized voices in an effort to represent her multidimensional communities.

OK Naledi showcases the sounds of Afro-House with traditional sub-Saharan clean guitar lines, classic deep bass, movement-inspiring beats and that iconic driving Afro-House tempo. OK Naledi is sure to get your toes tapping and body swaying to the music.

Born in northeastern US and raised in western Canada, Suzie Ungerleider began performing under the name Oh Susanna in the mid-1990s, winning instant praise for striking voice and poetic songcraft. Suzie had been quietly working as a clerk at a Vancouver library when in 1996 she self-released a cassette tape of seven songs recorded for just $200, and found herself besieged by music industry executives and agents after performing a tiny set at a local club. For over two decades, thousands of shows, and ten critically acclaimed albums, Suzie’s gloriously emotive, crystalline voice, her bewitching performances and her fierce song-writing have consistently captivated audiences, her peers and the press. She is the recipient of a Genie Award for Best Original Song and a Canadian Folk Music Award for English Songwriter of the Year. She has also been nominated for two Juno Awards each for Best Roots and Traditional Album of the Year, as well as four Canadian Folk Music Awards for Best Solo Performer, Best Contemporary Singer, and English Songwriter of the Year.